A January Project: The Cake Room

Well the Cake Room / General All Purpose Storage Room that is.
I do cakes as a hobby, but I also teach cake decorating classes at a local craft store.  This room has been pretty much a storage area for all things cake that I have collected over the last 10 years, and crafts/odds and ends, and the stuff I just haven’t known what to do with.
Back in the fall, it was decided that all the floors in the house would be replaced.  At that point I started cleaning this room up and putting some things in the garage sale pile.  I didn’t get a picture then, but I did remove several things from the room, including a large number of cake pans.

The floor replacement actually started on Jan 10th, and consisted of having to pack up all the rooms and move everything from one room to another while they pulled up carpet and laid new floors.
The below pictures are what I was left with from the fall clean out.  Like a lot of my projects I got stalled in the middle, and left everything as was.
These are cell phone pictures, so the quality isn’t great.  At the time I did this, I didn’t know I’d be starting a blog.  I just wanted the pictures for my reference so I could see the difference. 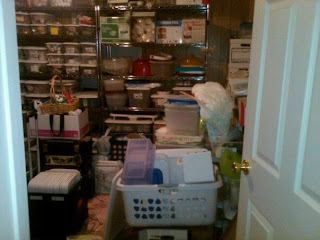 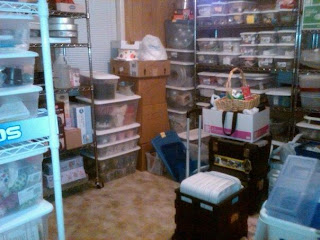 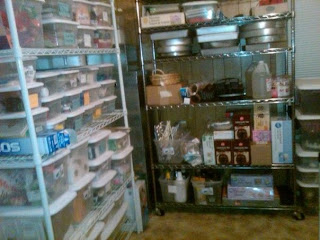 The first is standing in the door way and then the pictures go counter clockwise from there. And yes those are four big 48x72x18 shelving units in this room. Plus the picture doesn’t quite show everything. There is a stack of boxes about waist high to the left side of the white shelving unit.
This is the empty room, after the new floor was put down.  Ahhh, a blank slate! 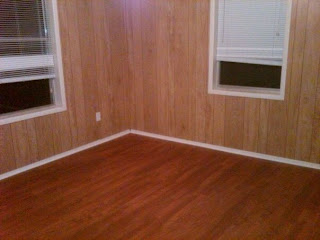 And this one, well this one is almost all of the cake stuff moved into my kitchen. It really doesn’t show the full scoop of things either. There were literally things piled and stacked from my fridge to the washer and drier. I even had boxes on top of the washer and drier. 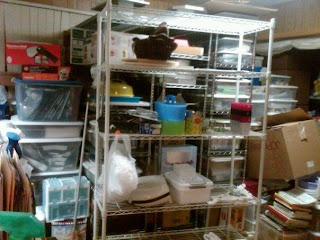 I’m sharing this picture, because this was a little of my decluttering efforts. What cracks up me most about this picture?   Well my best friend’s daughter just turned 4. I’ve done all but this year’s cake, and I bought candles the last three years for the cake. And for any other of the number combinations, I’d have to wait two to three years to use them. Considering these have been in a box for probably at least 6 years, I decided it was time they go and when the time comes I’ll just buy new candles. Because really, am I going to remember I have them? 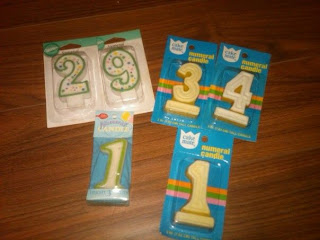 This is another decluttering of mine. The boxes are full of cookie cutters.  The bigger stack on the left would be the ‘to keep’ pile, but at least I was able to let go of about a third of it. That’s progress for me, especially when I didn’t think I’d get rid of any of them when I first started opening the boxes. I still have candy molds to sort through, but because I was able to condense down a lot, and I was already drained I decided that they could wait for another time. 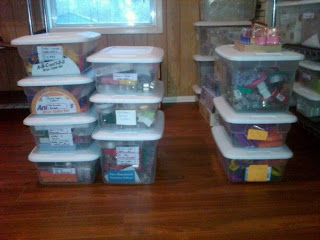 And now… (You may want to go back up and look at the before pictures just for a moment.) 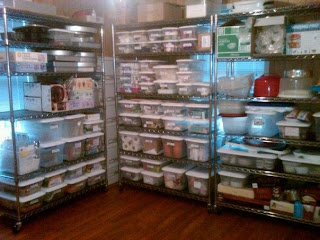 The white file boxes in the corner of the two shelving units are the candy molds that I need to go through. There are also some boxes that are on one of the shelves I’ll need to sort through as well. 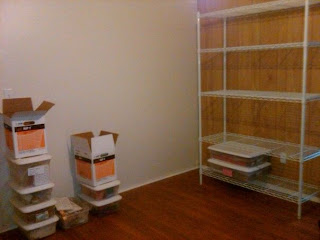 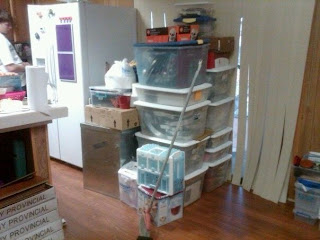 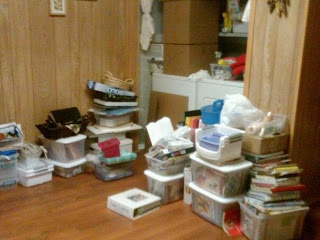 These two pictures show the rest of the stuff that came out of the room, that would need to go back in there or somewhere else.

At least 4 of the plastic containers (two tall and two skinny) were moved out to my storage building. I’m not sure if they are there to be stored or if I’ll put them on the garage sale side. But for now they are not in my house.

The metal boxes, there are two that size, and smaller ones inside of them, which are my cake travel boxes are also out in the storage room. I don’t want to get rid of them, but I won’t need them until the next convention I go to, which won’t be this year.

So this is the other side of the room now… 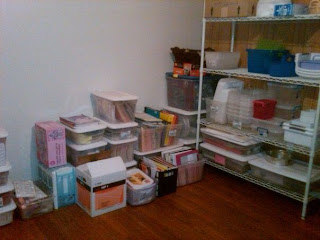 The boxes stacked in the corner are 3d or shaped cake pans. Most of the other boxes are papers, magazines and books. I’ll go through them and scan what I want to keep then get rid of the books. Right now, I have too many other things going on to worry with it. It’ll be nice to clear it out and have more free space. And the items from the tool box/Castle cake set and the 4 boxes to the left are items that I plan to use as give a ways for my students.

The only cake related items that were missing from these pictures are my two rolling tool boxes, tool caddy and my bag, all of which are class stuff.
When the room was finished that day, there was also one wall that just two boxes of lids for various plastic containers.  My ‘craft storage’ has since been put on this wall.  And well to be honest other items have been moved into the room from the dining room clean out.  My Grandma’s Wedding China and all my vases/candle holders have been placed in here for safe keeping, for now. 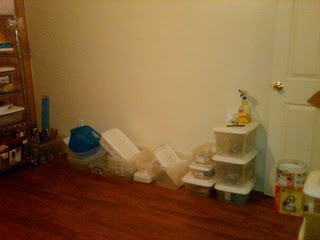 I have two rows of empty plastic containers.  Some of these containers were used for the hallway/bathroom projects and also for the ‘craft storage’ (pictures coming soon for that project). 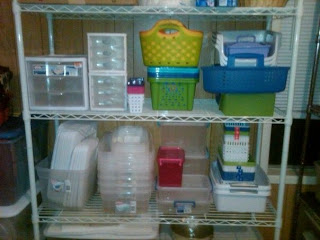 Since the fall quite a few items have come out of this room.  They have either been thrown away or put in the garage sale pile, so I really don’t have a clear idea of how much has left the room vs what stayed. My main objective was to get it cleaned out and organized, so I really haven't kept a tally while I was working on it.
I do know that by looking around the room that it definitely has less in it, especially randomly piled up. I also feel less stressed when I enter the room.

I did learn one lesson.  Do not use removable labels on plastic containers. They just don’t stay stuck. 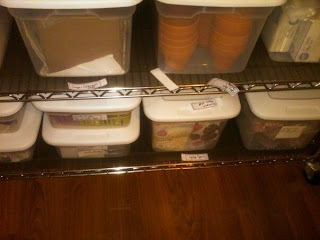 Texas Sugar
I’m just a single thirty-something year old that has hit a fork in the road and have decide it is time to make many changes in my life. Through this journey I will share my daily triumphs or trails, along with what ever may happen along this path I’m on.